We've seen a lot of amazing things in the last 5 days, but because I need to get some sleep, I'm only covering the first two since leaving Berlin for now.

Tue, Apr 26
We left Berlin and drove 4 hrs (plus 2 for bad traffic) to Bad Neustadt where my Great Aunt and Uncle live (Tanta Paula und Onkel Burkhardt) ... my Dad's aunt and uncle/my Grandma Liesi's sister and husband. I had never met them so that was pretty neat. We had homemade cake and chatted with them (mostly my parents in german, though I understand bits and pieces) for a couple hours as well as saw the very room and bed where my Dad spent a year there as a kid. The view from their house was so charming! We've been using that word a lot through southern (Bavarian) Germany. 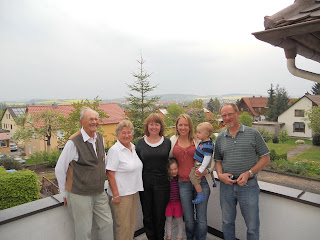 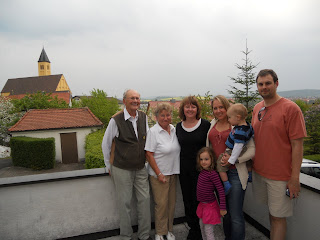 We continued on to see the castle of Bad Neustadt (there's a castle in every town around here since these all use to be kingdoms or feifdoms or something like that). This first one creeped Reagan out a bit ... old, vacant and spooky seeming I guess. 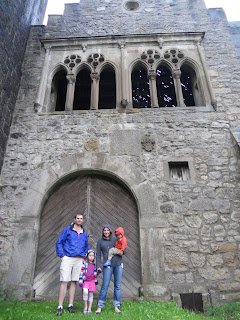 After that, we made our way to Weikersheim, part of the "Romantische Strasse" or Romantic Road that makes it's way from one quaint, charming town with a castle to the next. We stayed the night at my Dad's cousin Harold's house. Harold and Ute were wonderful hosts! We had a great spaghetti dinner, plenty of comfortable space to sleep, and a great breakfast. We saw the Weikersheim Castle with them the next day before heading on our way.

Wed, Apr 27
After the Weikersheim Castle ... 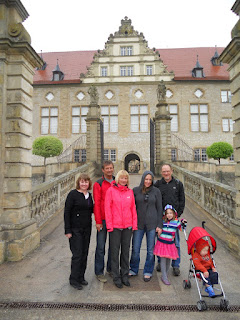 How can you not photograph the bejeesus out of this stuff ... cobblestone streets and cute little buildings straight out of fairy tales! 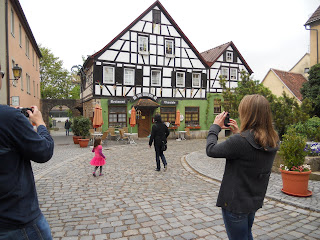 .. we drove about 30 minutes to Rothenburg ob der Tauber (on the Tauber (river)). This place was unbelievable! It was surreal that people actually lived there since we felt like we were in Disneyland or on a Hollywood movie set. I'll let the pictures speak for themselves. "Quaint" and "Charming" were understatements. 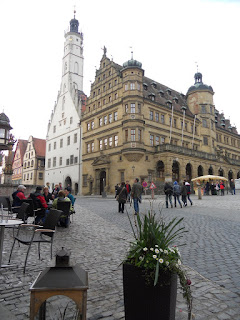 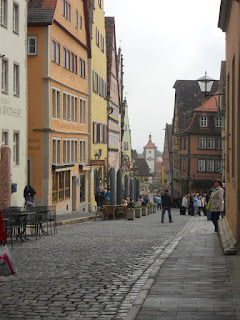 After wondering how in the world we spent 6 hours there, we drove on to Ulm, famous for the tallest church in the world ... yes, the world! I guess they were attempting to actually reach god :-). More on that next time.

The view from Augie's apartment! 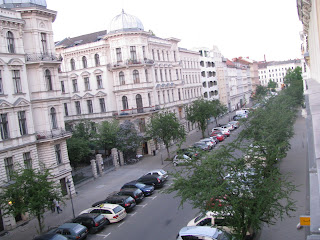 We've been having a great time so far... arrived 2 days ago. (I'm typing on Augie's german keyboard and it's pretty annoying... the y and z are switched, the apostrophe requires shift key and is farther away, the shift and return keys are farther away than usual). The flights went well, kids got about 4.5 hrs of sleep on the long flight to Paris (10 hr flight) and it was very bizarre to see the daylight when my watch said midnight and I was feeling ready to try to sleep a bit. I ended up not sleeping and missed a night's sleep but feel normal after a regular night (even though the kids kept me up for 2 hrs in the middle of the first night here).
2 exhausted travelers 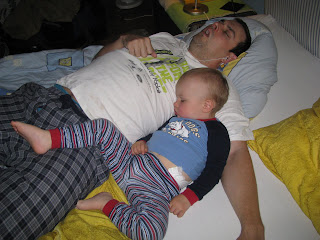 Cam's been dealing with some allergy issues, not horrible, but annoying. They are exaccerbated here since Augie has a cat. Being away from the apartment today helped him out.

Augie hid tons of chocolate eggs and bunnies and such plus 20 colored hard boiled eggs in the courtyard at her apartment building as well as set out a great breakfast spread and we all ate and the kids excitedly gathered all the goodies. Happy Easter!
This is almost everything ... except whatever gave Reagan a chocolate mustache already :-) 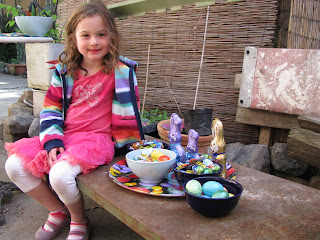 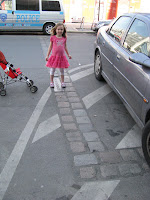 After that, we went to Checkpoint 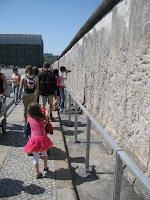 Charlie (Reagan's standing on the old Berlin Wall in the left side picture), then the place where Hitler committed suicide along with a section of the berlin wall left remaining (pictured right), and then the Haus Am Wannsee (where the head nazis laid out their plan to get rid of "racial aliens"). Pretty crazy, I took pictures of some of the papers (translated versions) outlining their plan (talking about mixed race jews that were part german and whether or not to evacuate them or not and who they would let stay/live but would sterilize so they couldn't pass on any more jewish blood. Just totally insane - see pics of 3 pages of it below). As I was explaining some of this whole thing to Reagan, I told her about Great Grandpa Andrew being in one of these concentration camps. She had a few questions, but didn't dwell on it. We tried explaining to her how none of us would exist had he not stayed alive and she didn't seem to grasp that even though I tried explaining it again. Oh well.

On the way back, we found a street fair and the kids got to do a few rides, then we ate at a very traditional german restaurant and had awesome pork and dumplings and schnitzel, etc. The weather is nothing but perfect and with a light sweater, we could eat dinner outside (both of the last two nights). The first evening we got here, we walked a block and a half to a really great vegetarian restaurant and then stopped for an ice cream cone across the street from Augie's apartment on the way back. More sight seeing for Monday and then heading south Tuesday morning. 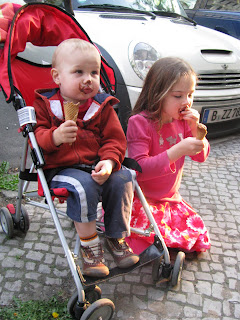 Can't be in Germany and not order a beer larger than your own head :-) 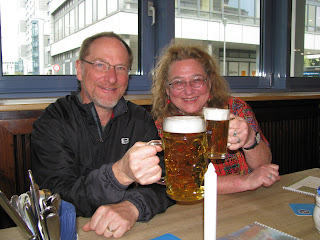 Differences that stand out here:
1. Ordering water at a restaurant isn't easy ... you must specify tap water, otherwise it's bottled and getting a waiter to back down from wanting to give you bottled water takes a bit of back and forth (even with Augie speaking to them in German, not because of a language barrier)
2. Never turn right without watching out for bikers
3. Not an SUV in sight, lots more smart cars, and very few vans
4. The "walk" and "don't walk" signs are little walking and standing figures with a hat on, the walker is green and the standing person is red
5. The holes in toilets are in the front of the bowl instead of toward the back

(Adding our final day in Berlin)

Holocaust Memorial (some heart wrenching stories and pictures in the underground museum below these structures). They warned us about bringing kids in (Ryan was napping at home with Augie, so it was just Reagan) but said they could provide crayons and something to color. That worked perfectly when we noticed all the pictures were at adult eye level and you needed to get close to tell what was going on. 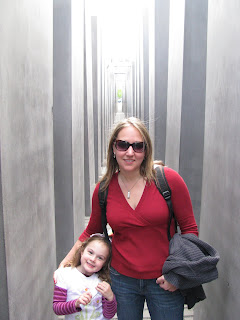 Justice of the Ministry where Augie works as a translator (or a Sprachendienst) and has met some famous political figures because of it! 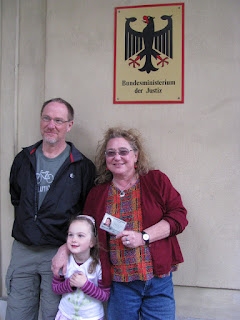 3 translated pages of the (huge, multi-page) document created (in a fancy lake home that was taken from Jewish people) to deal with the "racial alien" "problem". Clicking on each will show it large enough to read ... practically makes you sick to your stomach, but worth reading. Then just hit the "back" button to return to the blog (It annoyingly returns you to the top of the blog and you have to scroll down to this post again ... sorry!). By the way, "Mischlinge" means "mixed blood" 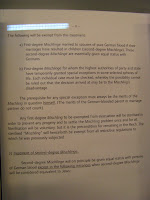 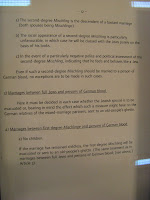 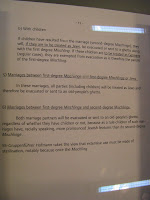 Posted by Camelot Blog at 3:36 PM No comments: