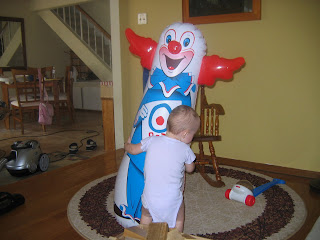 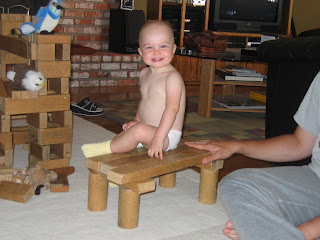 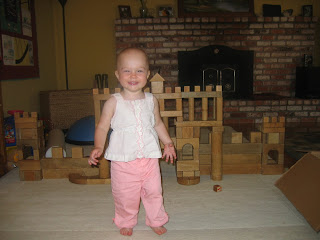 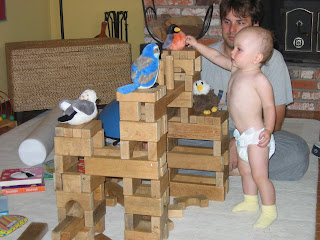 Posted by Camelot Blog at 6:45 PM No comments:

After going through a 12-hour stomach virus with Reagan Thursday night and then seeing the doc and finding out nothing else was going on, she was fine until last night again (saturday even though this post is dated Fri ... that's when I started writing it ... how do you edit the date?!). She had vomitted 12 times between 6:30 and 4am the first time and then last night, just 3 at night and 3 this morning. Not sure what's going on, but the fever still goes up to 100.something every evening, so now with this, I'm starting to feel like this is more of a thing instead of a few commons issues like sore throat and stomach virus. I'm calling the doc in the morning again since they said to call if there was any more vomitting after the first long night.
Posted by Camelot Blog at 11:02 PM No comments:

Fever with Teething ... Myth or Reality??

So, her fever's still up at night ... low grade ... but there. Today I noticed the corners of molars piercing through on both upper sides. I've heard molars are tough and take a couple months to come in and it's hard to believe she's having this fever for any other reason ... BUT, the doc says it's a myth. The American Academy of Pediatrics book I have as well as everything else I've ever read says they can get a low grade fever from teething. What gives?
Posted by Camelot Blog at 9:57 PM No comments:

That's the name of what I'd like to invent. Joggers have baby joggers and bikers have baby bike trailers. It would be like a jogging stroller, but would attach to your hips allowing your arms to be free for counter-movement and balance.

Why do I care about inline skating all of a sudden? I signed up for some torture ... the Athens to Atlanta Roadskate Event ... except this time I'm doing the shortest 38-mile version ... unless I'm feeling gutsy the day before, then I may switch to the 52.4-miles. (In 2004, I had a funeral for my ankles after skating 87 miles in 11 hrs and 45 minutes ... never again.)

Anyway, I dusted off my old inline skates (which still have mucky and now rusted wheels - oops! - from all the rain that made that day in 2004 extra fun ... of course I didn't clean them when I got home ... I wasn't ever touching them again!). I took them for a spin today at the State Park and was a little nervous, especially since I'd be pushing the jogging stroller at the same time. Overall, that part worked fine, especially if I pushed one handed to do the "skater arm swing". It wasn't very fun when it was slightly uphill with a headwind though ... on top of pushing the stroller, which isn't that light cause we got a cheaper one ... oh, and on top of the rusty, sticky wheel - that worked itself out by the time I was heading back with tailwind and slight downhill - ya know, when I didn't need it. My feet were hurting almost immediately, mostly because I wasn't relaxed enough and was clenching them the whole time. I skated for about 25 minutes and that felt like enough right now ... hopefully, skating has a quick feet/knee/hip adaptation period just like biking does with the butt bones ... because I only have a month until the event! My one hip that's really tight is especially feeling it. After today, 38 oughtta do me in just fine. I'm optimistic that it was just rustyness all around though and that I'll feel better next time I go out.

Oh, and Reagan was mesmerized by these crazy wheels attached to my feet. In the middle of my skate today, I parked her and did some circles in front of her on the skates and all I kept getting from her was the sign for "more" while she stared with wide eyes and open jaw.
Posted by Camelot Blog at 7:35 PM 1 comment:

Email ThisBlogThis!Share to TwitterShare to FacebookShare to Pinterest
Labels: Melanie, out and about

Click on this link, then click on the "i" in the center of the first photo to see my captions during the show. At any point, you can click on the picture (or hit the "i" on the keyboard) to take the caption away ... and vise versa to bring it back again.
http://www.flickr.com/photos/atcamelot/sets/72157601808666704/show/
Posted by Camelot Blog at 9:21 PM No comments: