I feel like Reagan's nap/sleep schedule has been all over the place lately. It seemed like she was needing to wait longer before taking her morning nap, but then her afternoon nap would end up so late, it was pushing her bedtime later (but she doesn't wake up later in the morning) ... or we'd skip afternoon nap and she'd be a disaster by dinner time, hate her bath, and need to go straight to bed.

Yesterday, another mom told me that she's having the same problem and the doctor told her to try going with an earlier morning nap and it worked. So, I tried that today and it worked! The wierd thing, well a couple wierd things actually, are that she's taking her afternoon nap right now, just over 2 hrs after waking up from her morning nap AND she slept for 13 hours last night! Maybe she's catching up from the last few days, where her schedule has been all over the place ... or maybe she knows I want her to nap before I drop her off at Megan and Anya's house this afternoon while I go swim, bike, and run to get ready for my triathlon :-)
Posted by Camelot Blog at 1:59 PM No comments:

When we pick Reagan up, she non-stop points at things saying "dat". When Reagan's not in our arms, she's usually whining and fussing until we pick her up so that she can point and say "dat". Once we name the object she's pointing at, she moves to the next one. She also points at things from her high chair ... I guess she just needs to be at our eye level to make sure we're paying attention. 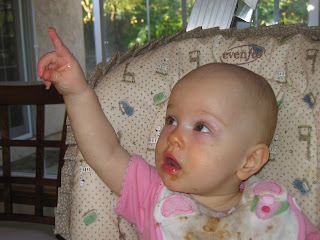 Posted by Camelot Blog at 8:12 PM No comments:

Nothing less than thoroughness from Cam, I love it! In order to make sure we'd have room behind our new sink to install our new faucet and to make sure the faucet had adequate reach to both sinks, Cam made a replica of our counter space out of a cardboard box and set the whole thing up. I just liked seeing what it was going to look like together. :-) 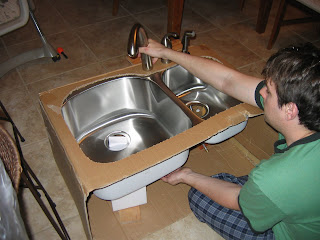 Posted by Camelot Blog at 8:02 PM No comments:


Mid-March is the peak of the Gray Whale's northern migration. We rode the shuttle bus and hiked out to Chimney Rock and the Lighthouse, the best whale watching spots in the bay area. After all that work, we got some great views, but no whales. Others in our group who thought that was too much trouble happened to see two whales while they were waiting at the beach near the parking lot. Figures... 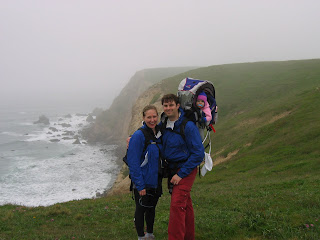 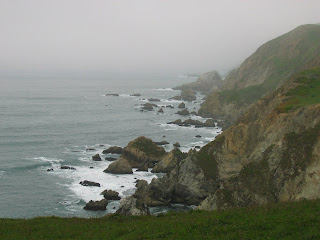 Reagan's favorite view: waves, surf, sea birds, seals, wild flowers. She was quiet for a whole 5-10 minutes while she watched and listened. That's a long time for this chatter box. She only peeped when Daddy turned the wrong direction, and she could no longer see the ocean from her perch. Her first time seeing the ocean was all the entertainment she needed. 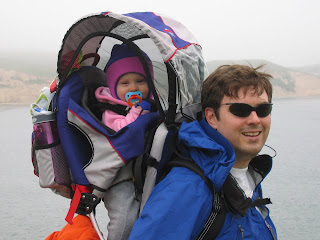 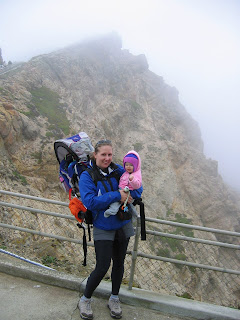 Mom & Reagan at the lighthouse. With a little help from Mommy, Reagan walked up one of the 310 steps back up to the trail. 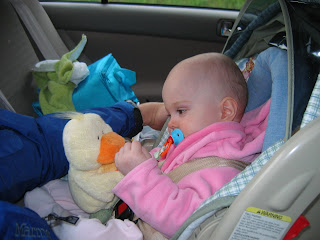 A tired babe riding home with Quackers the duck from Grandma Connie.
Posted by Camelot Blog at 6:50 PM No comments: 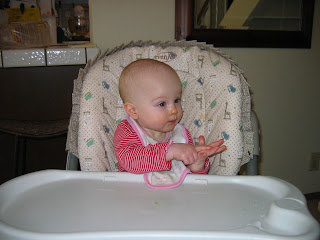 It's "more"! We've been trying to teach her this one and she got it ... her first sign other than "hi", "bye", and "clapping". Turns out she's really saying "again", but we're using it for "more". In this case, it was more strawberries. She definitely gets it because she'll ask for more even though she still has tofu and veggies on the tray, but is out of fruit or avacado.

Posted by Camelot Blog at 5:36 PM No comments:

Get It Straight Da Da!

Cameron put Reagan to bed tonight and as usual, she stopped drinking her milk (bottle in this case) when she was ready to be put in the crib to go to sleep. He gave her the passy and the white teddy bear, laid her in the crib, and left the room, but her scream of bloody murder brought him right back in; something wasn't right. He helped her lay back down, this time giving her the passy and the PINK teddy bear ... and all was right in her world again.
Posted by Camelot Blog at 9:48 PM 1 comment: 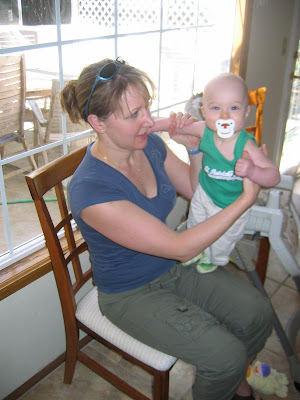 Reagan's friend Dante turned 1 on March 15th and celebrated today. Reagan sported her new hat and "St. Patrick's Day" tank from Old Navy for the party. As usual, several comments were made about how cute and happy Reagan is. One mom, who we've met a couple times at Library Story Time, actually wanted to take a picture of Reagan to show her husband (who couldn't be there today) how cute she is. That's my proof that I'm not just saying this stuff cause I'm her mom. :-) Anyway, she does seems more animated, talkative, excited, social, and outgoing compared to most other babies. Everytime I bring her into a full room, she starts shrieking with delight and pointing. When I put her down to play, she does her crazy butt scoot crawl very quickly, laughing and shrieking and waving hi. She'll go right up to other adults and climb on their legs and talk to them and wave hi too. It's pretty cute. She definitely draws attention. I'm pretty sure she's not shy. :-) Anxious about separation, though, that's another story. She checks that I'm still near by from time to time. If I'm not (ya know, like when I leave her alone sometimes ... JK!), she suddenly needs to be held non-stop by her caregiver. It's only been a handful of times, no longer than 2 hrs so far, so I'm hoping she gets used to the fact that Mommy comes back and everything's ok. She did leave the arms for a few minutes to play with toys the last time, so maybe we have progress.

Here are all the babies that attended the party (from left: Reagan, the bald one, Jake, Dylan, Dante (birthday boy), Aubry (only other girl), Brayden (well, his butt at least), and Charlie (the other almost bald one, but he's only 4 months, so he has an excuse). Oh, then there's me who's actually not a baby and shouldn't have been in the picture ... oops! 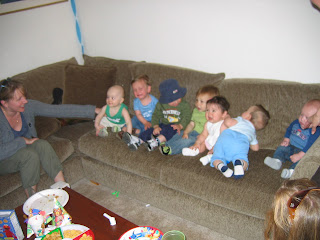 Here's Reagan walking with Daddy in the backyard, where they had fun toys set up for the babies. 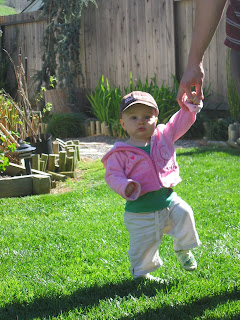 Posted by Camelot Blog at 10:29 PM No comments:

We finally decided to try out our new bike trailer/jogger (converts by popping a handle bar on the back). Well, it's new to us; bought it from another Mom in the Mom's Club for only $90 and these normally run $200-$300 and it's in great condition. We decided with this little motorhome, we could fit a lot of groceries in with her and brought a blanket to help separate her from the food/bags. Well, we bought so many that Reagan didn't fit and we had to switch off carrying her and carting the groceries all the way home (from Safeway, the far away store!). It all worked out fine other than Reagan missing her afternoon nap. 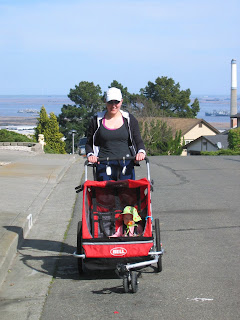 It's coming in especially handy now that I'm watching another little girl on Wednesday mornings, Anya (17 months, 6 months older than Reagan). I took them with me to the Mom's Club meeting and here they are, ready for the 20 min walk home. What cuties sipping their water in unison all snuggled in the condo! On the way home, Reagan fell asleep and Anya was trying to put her passie in her mouth for her. It was really cute. 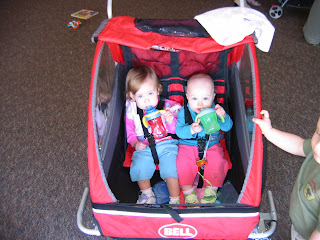 Posted by Camelot Blog at 1:54 PM No comments:

Email ThisBlogThis!Share to TwitterShare to FacebookShare to Pinterest
Labels: out and about
I'm Quilting!

I'm taking a class at my friend Kate's Mom's fabric shop here in town and so far, I think I might really like quilting, especially the design aspect. Here's a sneak preview of what will eventually be a huge (maybe 60"x 60") T-shirt quilt. Can anyone guess what the theme is/which t-shirts I'm using? 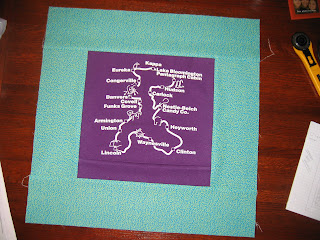 Email ThisBlogThis!Share to TwitterShare to FacebookShare to Pinterest
Labels: Melanie
Exploring the Back Yard 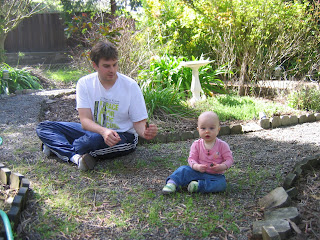 Reagan requests going outside now because she loves it so much. She stands at the back door and points and talks (babbles). She can point to trees, leaves, and flowers on command and loves to sit and pick and study leaves and pebbles.
Posted by Camelot Blog at 1:24 PM No comments:

Can you tell from this close-up I tried to take this morning? Look close, there are little white spots popping through, I swear ... so it's hard to tell here, but trust me. I can even feel it in one spot. She wasn't doing her motor boat sound as much until the last couple days and has been a more finicky eater as well ... stay tuned! 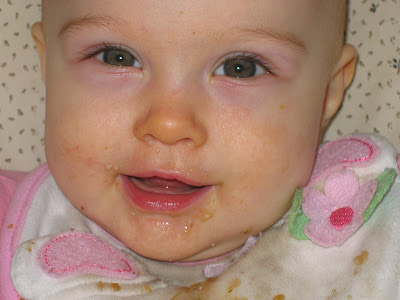 Posted by Camelot Blog at 10:07 PM No comments: 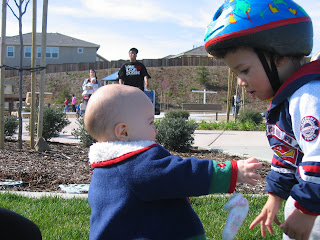 Last weekend at the park, a 2 yr old boy riding around on his tricycle had Reagan like a deer in headlights. He must have thought her stare meant more because when he came over to say hi, he very sweetly bent over and gave her a peck on the cheek. Cam didn't think he'd have to worry about her dating yet ... poor Dad.


Reagan also went in the swings, rode the bouncy fish, went on the slide by herself, and walked around holding our hands! She can now grab a finger from a seated position and stand up and start walking with one finger hold. 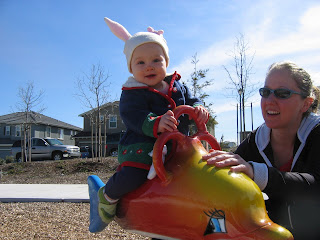 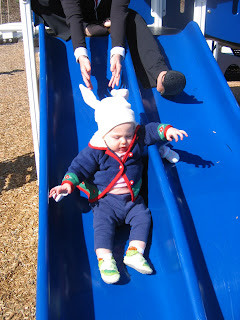 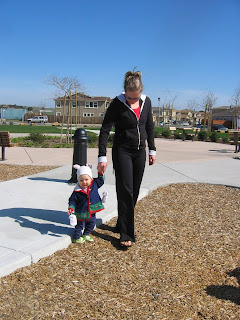 She correctly descended the stairs twice this morning! She has figured it out. She's pretty proud of herself too. She also points to the light, says something with an "i" sound, and looks and reaches toward the switch. Cam showed her how to flip light switches the other day and she has now made the connection that something happens when they're flipped (well, at least the one in our dining room. Other rooms may still be confusing). She will also look and point at the light fixture if I ask her where the light is. I can't believe how much she can understand and how quickly she learns. I just read that at this age, it's time to start teaching them concepts about objects they know, like hot/cold, wet/dry, in/out, and colors.
Posted by Camelot Blog at 10:14 AM No comments: 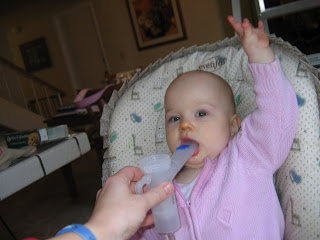 The doc detected a little wheezing/ hoarseness in her lungs and loaned us the nebulizer for 5 days. She had to breathe asthma type meds (albuterol) for 6 minutes at a time twice a day. She got used to it and I think came to enjoy it, but I had to keep her distracted with one handed itsy bitsy spider, this little piggy with hands instead of toes, and pointing and naming facial features on each of us. I think she's also used to the camera and is waving at it here.
Posted by Camelot Blog at 10:58 PM No comments: 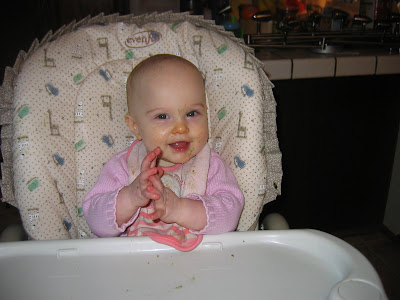 Posted by Camelot Blog at 10:55 PM No comments: