I finally just jotted some of these down because I kept forgetting exactly what she had said at the end of the day when I'd sit down to blog about it:

"Mama, Dada, Readan, owo doe, do dis one" (she was instructing us to stomp our feet like her, but to do it "over there")

Me: Reagan, can you eat your spaghetti?
Rea: "No, jus Mama eat it"

"Daddy is outide" (outside)

This is how she asked me to change her diaper this evening:
Rea: "Mama tains Readan"
Me: "oh, is your diaper yucky?"
Rea: "yeeah" (she was right, it was full of everything)

Before a diaper change, she'll tell us "no pee, jus poop" or "no poop, jus pee" and she's accurate almost every time.

And the funniest one from yesterday ... we got ice cream as an after doctor treat and when we were almost done, Cam told Reagan he had to go back to work and Mommy and Reagan were going to take a nap.

Getting Ready for a Night on the Town: 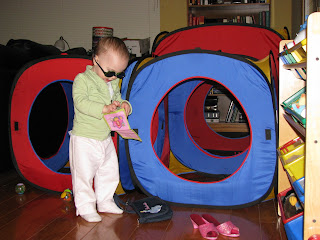 I'll borrow "tun-ee butts" (20 bucks) from Mommy and Daddy, but let me get my heels on first. 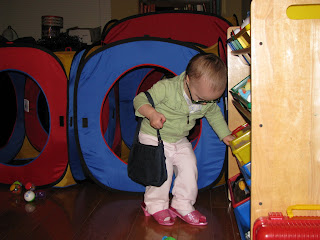 Thanks Dad! I'll put it in my wallet. 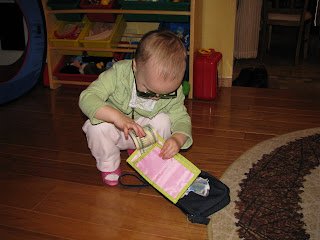 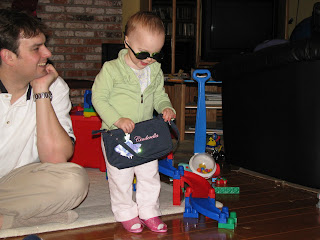 Don't wait up for me guys! 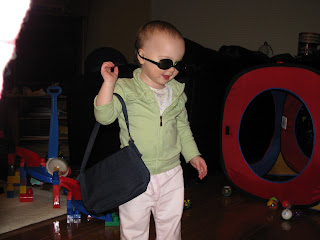 Posted by Camelot Blog at 3:32 PM No comments:

Yesterday, when Reagan got up from nap, I explained to her that we needed to go in the car and pick up Daddy because he rode his bike (over to Concord, his old route he use to do when I worked down there). Reagan starts saying, "Daddy bite, uh up, hoe. Don, don, don hoe." (Daddy bike up, up hill. Down, down, down hill.) Then today, she woke up from her nap and we hear her saying up, up, down, down, down hill again, so when I went to get her, I asked her, "Did Daddy ride his bike yesterday? Is that what you're talking about?" She says, "Daddy wode bite ..." (rode bike) ... hello, she just used the past tense of ride ... how the hell did she know to say rode?!?!

Whenever I wipe her face after eating and she acts like I'm torturing her, I always say, "oh my goodness" in a dramatic tone, mocking her so she lightens up and relaxes about it. Today, she repeated "oh my nooness".
Posted by Camelot Blog at 9:19 PM No comments:

Be sure to click on the "i" in the midle of the first picture to see all the captions!

Be sure to click on the "i" in the middle of the first picture to see all the captions.

Coming home from our trip was a bit crazy. Thank goodness we decided to drive to Burlington the day before our flights. What should have been a 3.5 hour drive took 8 hours!!! A bunch of our group left early the same day with intentions of getting to Toronto (8 hrs) and some to Detroit (12 hrs). They had to bail and ended up in Cornwall, Ontario for the night. They made it to Detroit the following night at 11pm and then my parents and Steven had one more full day of driving to Peoria after that (another 8 hrs). Not a whole lot worse than flying this time around.

At the airport, we find out we're "most likely delayed an hour and a half" but should get to the gate anyway since they may try to board early in an attempt to take off sooner. Well, we boarded at 3 and finally took off at 5:10, so that was fun. They actually announced that we couldn't get off the plane since being fully boarded increased our chances of leaving sooner. They followed that with "If you would still like to get off the plane, you are welcome to do so, but we will not be able to let you back on and cannot give you your luggage." So nice of them to give options! :-) We finally taxi in around 6:30 only to find out there are no available gates to pull into, so we have to sit another 20 minutes before deboarding. So, after 4 hours, we're still on the east coast - Newark/New Jersey now. Luckily, we were already confirmed on the 7:40 connection to SF, but of course it was running an hour late. One bonus; we finally got to eat a real meal and there was a food court right by our gate. The drawback: our plan to take BART was shot since it closed at midnight. Rani bent over backwards and picked us up in SF (an hour drive) at 1am instead of the original 10:30 pick up in Pleasant Hill (20 min drive) ... so nice of her!

But wait ... there's more! Our luggage had a worse trip than we did apparently. They loaned us a car seat for Reagan and managed to deliver our stuff the following evening around 11pm. So, all is well now other than the torrential rain storms that just started today around here. Snow can be annoying, but it's much prettier.
Posted by Camelot Blog at 9:49 PM No comments:

We decided to have Reagan's official Christmas on the 23rd since we were leaving on the 25th. We also decided there wasn't much need to wrap her presents... she would think it was cool to find toys sitting under the tree and wouldn't remember next year whether they had been wrapped or not anyway. She got a travel size magna doodle that came in handy on the trip, a wooden train set, and a sesame street medical kit. 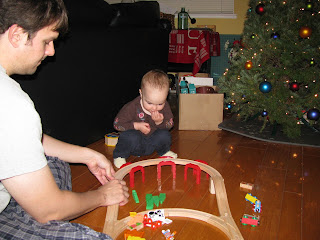 Posted by Camelot Blog at 11:01 PM No comments:

Email ThisBlogThis!Share to TwitterShare to FacebookShare to Pinterest
Labels: Reagan: misc
Catch Up From 2007 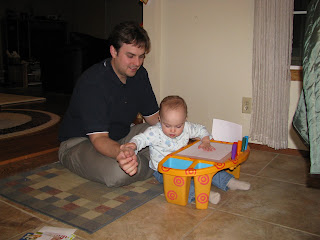 Posted by Camelot Blog at 10:24 PM No comments: 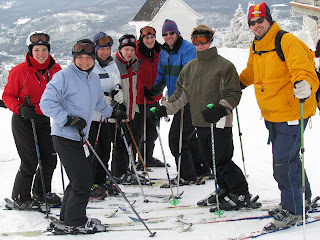 We just returned from our Mont Tremblant ski vacation/reunion in Quebec, Canada. There were 27 of us all together! Other than the cold/flu that was going around the gruop, we had a great time (I weasled out somehow, Cam's still recovering, and Reagan got a mostly minor cold).
Reagan and Jarred (my 3rd cousin, but feels like a 1st) were hilarious together. He's 6 1/2, 5 yrs older than Reagan and she was getting the biggest kick out of copying him. When they all came over to our condo one night, Reagan saw Jarred down on the landing taking his boots and coat off. She's calling "Deh-wed" at the top of her lungs whiles he's going as fast as he can calling, "I'm coming, Reagan!" It was too cute. Here's a couple pics of them. 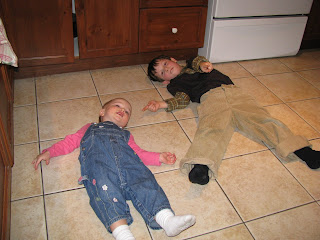 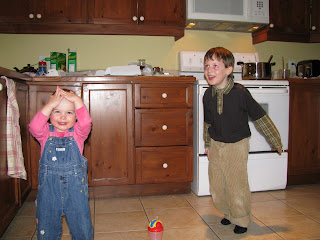 Another hit was "Baby Wo" (cousin Faire). She's adorable and bright-eyed, especially with her cute stunned look - which probably sums up how she felt most of the time with all these crazy people around. Reagan was so sweet and gentle (with some reminders). She would give Faire toys to play with, wanted her to sit on her lap (attempted this herself at one point), would pat her on the back, and generally get excited whenever she saw her. The first night, we arrived late and Baby Wo was already asleep. Reagan goes, "Baby wo wate up" (Baby Faire, wake up!) We got her excited to see Faire, so that was our fault. The next morning, Reagan was all about sharing Faire's teething ring saying, "Rea-run dis ide" (Reagan this side). 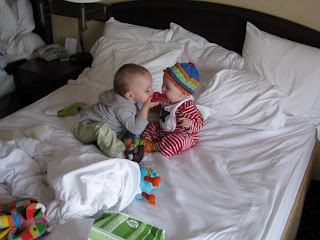 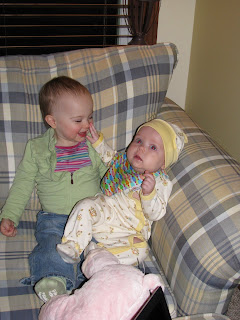 Aunt Bee and Uncle Danny were favorites too since they would sing on request non-stop, even if it was the same song 10 billion times. At least I know all the words to her favorite duckie song now.

Reagan thought the snow was pretty cool, but would have nothing of her little skis (she might have tried these if Grandpa Martin hadn't started off by showing her how they flew down a little hill by themselves. He wasn't there when she adamantly refused to sled down a hill the previous day). Those activities got a firm "no" no matter how fun and great we tried to make them seem.

Her first snowman at our hotel in Vermont en route ... 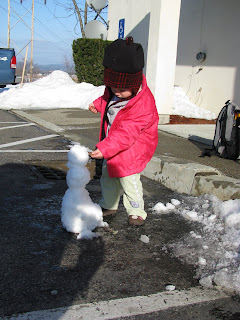 Moving away from the Reagan-centric view of the vacation, most of us skied 2 days and the weather was better than I imagined ... above zero the whole time! Cam only 1 day since he was so sick the first ski day that he slept til 2 and went back to bed at 8:30. Between my Mom, Aunt Trixie, Aunt Fran, and Step-Grandma Shirley, we had 4 cooked meals for the entire crowd that were delicious! We watched the Sound of Music one night and had a fun New Year's celebration playing a memory game called Things In A Box* (really hard, but fun and entertaining with a big crowd).

*Each person writes an answer to a question and tosses it in a bag/box. A designated emcee for that round reads them off 2 times. Everyone else has to try to guess who wrote which answer, taking turns around the cirle, and if someone figures out what you wrote, you're out until the next round. Even when you get "outed" before the round starts (by correcting the person reading the answers when they read yours incorrectly ... yeah, that's me ... hi), it's still entertaining to sit and listen to everyone play. Sample questions: What would you never want to do on a first date, What are dogs really saying when they bark, etc

Out pours the German chocolate and Gummi Bears from Augie's suitcase on the first night. :-) 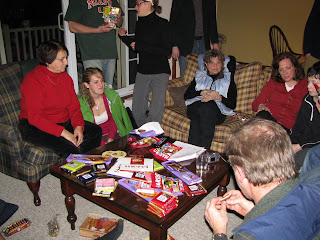 Posted by Camelot Blog at 9:58 PM No comments:

Email ThisBlogThis!Share to TwitterShare to FacebookShare to Pinterest
Labels: vacation
All Done Nursing

... Since November 28th! She was down to 1 pre-bed nursing that was only lasting a couple minutes and after singing her back to sleep one night on our thanksgiving weekend trip, I just incorporated that (the singing, but not until she's asleep ... no need make a habit of that) with her bedtime routine at home. So, after bath and jammies, it's a cup of cow's milk, one book, a review of her day, and then she lays down while I sing about 5 songs, say "nigh nigh, have a good sleepy with teddy and passy, I love you" and leave. She's only asked for "milkies" 2 times since then and as soon as I explained it was all gone, but she could have a cup of milk downstairs, she was fine with that. So, voila! Didn't think it'd be that easy!
Posted by Camelot Blog at 9:49 PM No comments: