The Battle of Please and Thank You

Breakthrough: Reagan said "please" as part of a request! We've had a long stubborn streak with refusal to say "please" and "thank you" ... totally testing how much control she has I guess and not wanting to be put on the spot about it. We didn't want to push so much that it turned into a huge stubborn battle, so we tried suggestion and explanation and encouragement for a while to no avail. I finally made a "Responsibility Chart" I had been planning on and decided that at age 3, she can say please and thank you, no more excuses, so it's on the chart as one of her responsibilties. Today was the 5th day using her chart and I was going through it with her to help her see what things she still needed to get stickers for. I also happened to make my favorite cookies to cure my sweet tooth tonight (she loves them too) and when she saw me licking the spoon, I told her she needed to ask and say please and she was the most torn I've seen about saying it. So many times before, she's told me, "actually, I don't want it" to avoid having to say please.

The key ended up being that I didn't act like I cared because it seems the stubbornness comes from us wanting her to, so of course she doesn't want to. So I just went about my business while talking to her about it so that it wouldn't feel like I was putting her on the spot and expecting it. At bedtime, we went upstairs and she was saying making a last-ditch attempt to still get a cookie by saying "can I have a cookie plea" since we had been letting her "get used to it" by saying "plea" the last few days - Cam's idea since she kept telling us she couldn't say it because she wasn't "used to it". I had already told her it was time to get used to saying "please" now. I kept saying "oh, you almost got it" with a tone that indicated belief that she needed the practice all while not making too much eye contact and continuing on with business as usual (to keep the I-don't-care-if-you-say-it facade going). I left her room to go get her toothbrush ready and she came in and told me, "I said it in my room". I said oh, that's good, but I need to hear you say it. She suggested that maybe if I came in her room, I'd hear her say it. I said, ok, sounds good and went to her room. She quickly followed and was doing the almost thing again and I kept acting encouraging, but not concerned/wanting it at all. She finally got something out that wasn't really asking but had the word please in it and since she's been all about telling us she's just "talking about" saying it, I told her I needed to hear the question with please. She started kicking her legs in the air being silly just like a nervous person giving a speech might twitch or rub their hands together or something and then actually got the sentence out! I smiled and said, "oh, let's go get a cookie" even though inside I was like holy crap, I broke her down! She made sure we knew that she had to kick her legs in order to say it. We made sure to let her know how hard she worked at saying it, how determined she was, and that it made us happy to hear it. I think she liked that cause she started saying "thank" just before bedtime story, but explained that she was saying it to her dresses. She's already decided to practice that one now :-) The psychology of all this is too funny.
Posted by Camelot Blog at 1:24 AM 2 comments:

This is out of date order, but I can't fail to mention the incredible help from my parents right after Ryan was born. My Mom was here 3 weeks and the night and day difference between how clean the kitchen stayed, how many cooked meals we ate, how little I had to be responsible for Reagan's daily routine and how not burried in laundry I was is insane! My Dad was only here for 5 days, but still managed to fix all the major problems with the house. No more leaking water heater, he installed a new one. No more leaks through the upstairs bathroom floor, he re-caulked the edge of the tub, and no more falling over gate, he made it stand up straight and latch easily again. Thank you both! 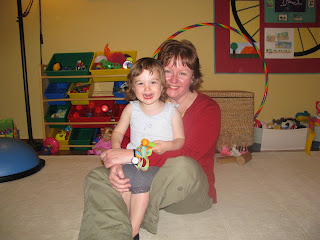 Ryan loves watching Reagan's every move and seems less and less bothered by how much she smothers him and how shriekingly loud she is sometimes. She always wants to help him when he cries and has gotten good at giving him the passy, even the technique of holding it there until he calms down. She likes to have him snuggle in her bed with her too. 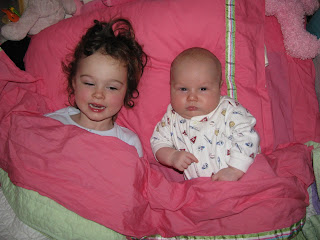 "Reagan, stop posing and look at me again!" 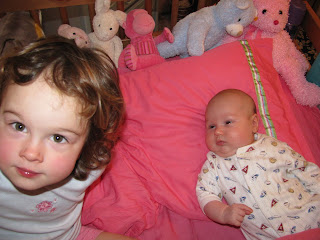 When I prop him up against a pillow so he can watch us, he always manages to slump over until he's flat on his stomach since he basically goes where his disproportionately huge head goes. I always "ask" him where he's going when he does that and Reagan gets the hugest kick out of it. See for yourself :-)

1. We sampled meatballs on toothpicks and bought some for home. At home, Reagan told me she didn't like the taste.
Melanie: Reagan, I bought them cause you liked them at the store
Reagan: I like-ed the ones on sticks
Melanie: Would these taste better if I put them on sticks?
Reagan: Yeah
Melanie: [puts toothpicks in meatballs]
Reagan: I like them now!

These next 3 were reminders of exactly what I say and sound like all day ...

2. Reagan wanted to call Daddy at work so I told her the numbers to press one at a time and when she was done and hung up, she turned to me and said "K... I'm off the phone. You be'd very patient for me."

3. I pulled all the stuffed animals down from Reagan's bed to change the sheets and she said, "Jesus, it's messy in here!"

4. I was putting meatballs onto a plate to heat up and she said, "holy crap, that's a lot of meatballs!" I've since explained that that's not really a nice word and Mommy shouldn't say it :-)
Posted by Camelot Blog at 11:03 PM 5 comments:


We also rented a jumpy house. Here's Reagan and JT (cousin) jumping after the party's over.

Reagan enjoying one of her gifts (from Jack)

Reagan had a blast coloring and finding eggs this year again. She wore each of her new dresses from Rani that day too. We started with yummy french toast for breakfast after the indoor egg hunt ... 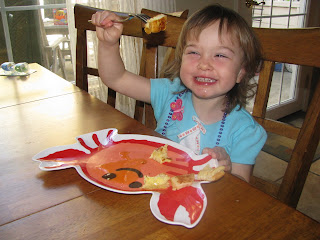 Now it's time for the backyard hunt ... in the pink instead of blue dress (totally Reagan's idea) 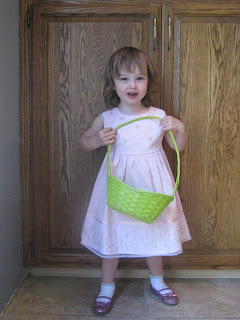 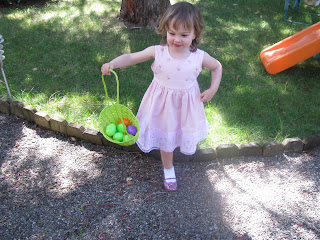 And finally an attempt to include Ryan in the festivities :-) 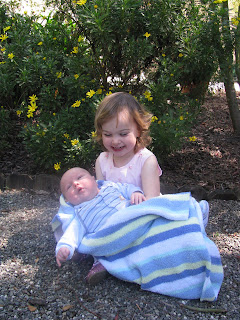 Posted by Camelot Blog at 5:12 PM No comments:

Email ThisBlogThis!Share to TwitterShare to FacebookShare to Pinterest
Labels: Easter 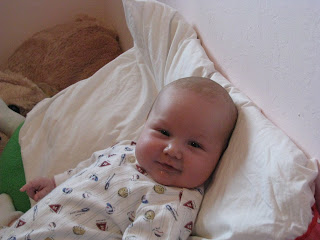 He was 14 lbs 9 ozs the other day, 97th percentile! He's actually 10 weeks old now and smiling up a storm, but also fussing up a storm a lot too. He sleeps great at night, horribly during the day. Unless he's attached to me, he basically doesn't sleep, but at night he's eating at 10 or 11, wakes to eat briefly at 3 and then about 6 or 7 (at this point I pull him into bed with me and we last til Reagan wakes up about 8:30). Not bad for his age but I guess he has the daytime to make up for too.
Posted by Camelot Blog at 7:43 PM 2 comments: