I endlessly searched craigslist for a few months straight looking for a loft bed, specifically a "junior/low loft" as I learned they're called ... basically half as high as a top bunk bed would be. The idea being to create more floor/storage space in her room without having her sleeping dangerously high. We ended up finding a traditional high loft and Cam realized he could simply cut the bottom off to make it whatever height we wanted and voila, a low loft!

Here's Reagan using her new tools from christmas (while wearing her new sparkle jammies and twinkle toe shoes too) to help put the bed together in the living room (so we could mark where Cam would cut it shorter). 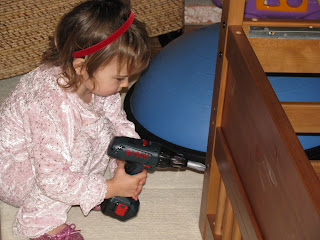 Almost done, just needs to be flipped right side up. 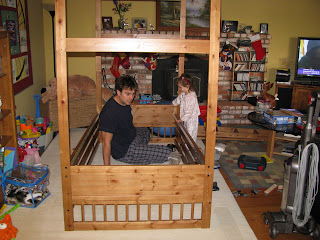 We also decided we needed a safer way for her to get in and out than the standard ladder it came with - at least for now. So Cam designed and built a staircase in a month! It's quite impressive and the wood-working skills to do it came mostly from when my Dad talked him through building our wood coffee table a few years ago. Here's the stairs loosely put together, but still unfinished, with Reagan already super excited and loving them. 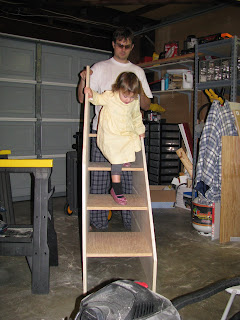 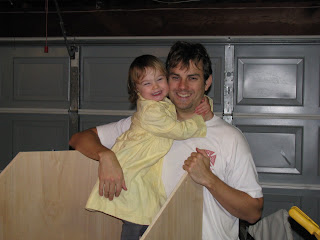 We got a twin mattress one Saturday morning and set her up on the floor under the loft for a few weeks until Cam finished the stairs. It was a good transition because we could see how she did with real bedding instead of just the baby blankets that would constantly get kicked off. It was amazing how she suddenly slept like an adult, staying mostly the right direction and mostly under the covers. She loved the whole concept of having such a big girl bed and just ate up every detail about it all ... like when I showed her that the comforter I bought had the same colors in it as her curtains (that was random luck, found it at TJ Maxx and the curtains a long time ago on a super clearance table at JC Penney for $6! I love the deals!). 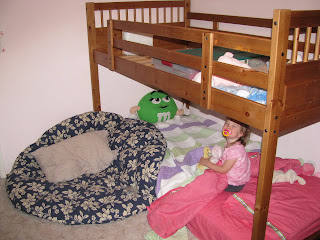 Here you can see how high the bed is. It has a clearance of 36 inches. Reagan is currently 37 inches tall. Cam and I are able to sit under it if we slouch a bit, but only as much as we normally slouch anyway :-) 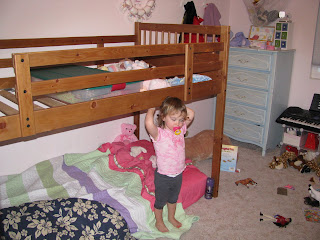 The front of the stairs are open and I immediately decided drawer-like baskets could go there for storage. I listed all the stores with baskets that I would check out, but ended up finding the perfect size fabric bins at the first store I tried, Cost Plus World Market.

By February 2nd, all was finished except some final rearranging. Here's a few pics of it all set up. We opened up the floor space in her room quite a bit by putting the keyboard, some cubbies and her little vanity table and chair under the bed. Now the rest of the room only has a bookshelf, the big reading cushion, and a tall dresser. 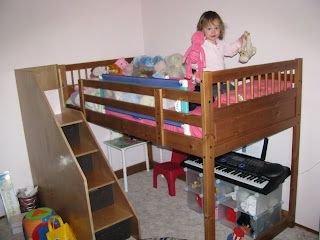 Cam's showing how the cubby bins pull out like drawers here. 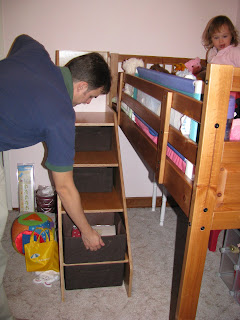 Next is a shot from underneath for a close up of Cam's woodwork and my perfect fitting "drawers". The top 2 bins hold socks, tights, underwear (I'm hopeful she's close to using these), and pajamas. The bottom bin holds extra bedsheets and the 2nd bin up holds her barbie stuff. There's also secret storage behind the drawers since all the space would otherwise be wasted. So behind the bottom bin is a box of Reagan's keepsakes and behind the barbie bin is all the other barbie accessories in one long pull out box from the garage that happened to be the right size once we cut the top half off. We have about a shoebox worth of space to store something behind the next one up, but haven't figured out what to store there yet. The top bin doesn't have extra room behind it. We have more storage space in her room than we need right now, a nice problem to have! 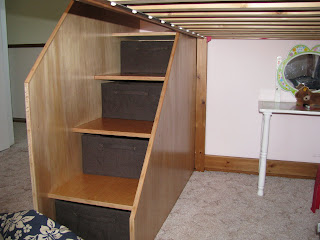 She's completely in love with this fun new bed and gladly gets into it every nap and night. The sleep issues had already improved to normal, but she's taken it a step further since the whole new set up, choosing to have us talk about her day while she's in bed instead of down on the cushion like we used to do and only requesting the extra hand holding some of the time.
Posted by Camelot Blog at 10:00 PM