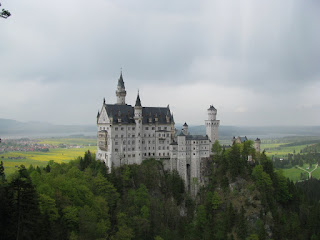 April 28-29:
After our climb in Ulm, we drove on to Schwangau and saw Mad King Ludwig's couple of homes. Construction was never actually finished on this extra summer home of his before he died. This is the castle that Disney copied the look of for their fairy tales and at their parks, so Reagan was a little in love with it!
Grandpa Martin on Ryan-stroller-nap duty, letting him sleep as long as possible before our tour 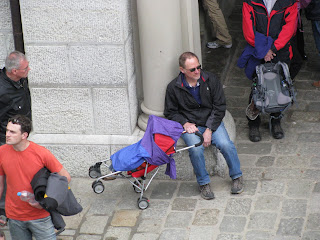 From an inner courtyard before starting our tour. 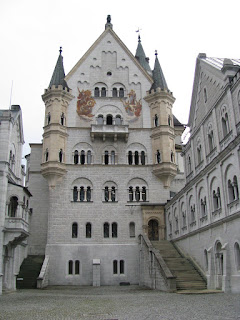 After touring the castle and making our way back down to the town/tourist area in the pooring rain, we found a cute hotel (where's Reagan's bed happened to have a view right out the window up at the castle on the hill) with another great restaurant. Cam tried pork knuckle and I tried red venison. Awesome!
Posted by Camelot Blog at 11:44 PM