Talking:
Yesterday, eyebrows, "eyeboos". This morning, juice, "doos". She really watches our mouths sometimes and tries to mimic the sounds. She also said her first 2 word phrase a week or so ago ... daddy hum. She was asking me if Daddy was home or coming home or something. Since then, she constantly points out Dada in pictures and any sound we hear, especially at the front door, she says "da da!" She's definitely missing him when he's not here now instead of only being aware of him when he's here. She also does a high pitched "mee" for meow and "oof" for woof.

Fever:
She's had a low grade temp at night on and off this month. I'm hoping it's just been a few little bugs in a row. Maybe the camping trips didn't help. Maybe taking her to the gym daycare in the mornings sometimes (her temp's alwasy down then and she seems fine) wasn't helping her get all the way better either. We went to the doc on Tuesday and turns out she has a sore throat. We've layed low this week. The last two days, she's also had 3 poopy diapers (it's usually 1 or 2 max) and they've been a bit softer with undigested food. Her fever's continued to be up between 100.3-100.6 each night since Tuesday and back down in the morning. The doctor has me keeping a record of her evening temp for 3 weeks so we can see if it's just related to the sickness right now or something else going on. So, a little worried in general about all this, but we'll just wait and see for now.

2 Cool Gifts:
Cam's Aunt Patti sent a huge box of books for Reagan and Aunt Bethany knitted an adorable dress that Uncle Danny brought along with a Dr. Suess book that she loves too. Here she is in the dress checking out her new cool stack of books. She really loves the one where you slide the wheel to find the baby animal to match the mama animal. 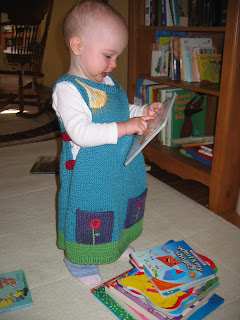