October Beach Day!
We're in what's probably our last heat wave around here (to make up for the coldest summer on record I guess) so we went to the beach! It was warmer than the day we went in June, totally perfect weather, no sweatshirts needed this time.
We planned to get there at 10:30, but ended up almost 2 hrs late due to Ryan waking up with an infected penis ... which has never happened before ... so of course it happened the one day we planned a beach trip. Saw the doctor at 9:30, who of course advised against sand play, then hemmed and hawed about it with Allison, who was car pooling with us, and decided to triple layer him on the bottom half and be extra careful since we couldn't bring ourselves to not go after all the lunch and beach packing. I picked up his antibiotic on the way out, gave him the first dose and kept it in the cooler. It all worked out and I managed to keep him sand free down there .. mission accomplished. We had another doctor check this morning and it was already looking much improved by last night, so no mommy guilt about the beach trip... yay!
Here's Ryan and Jack playing monster trucks in the sand. There is a strange thing with boys and vehicles that I don't get. Ryan sleeps with cars or trucks in his hands like they're teddy bears. He also hugs a teddy bear though :-) At least 2 of my friends with boys also talk about them sleeping with their cars in the bed. 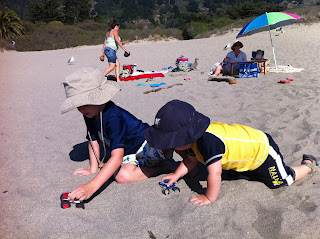 Jack, Ella, Ryan, and Reagan playing in the sand 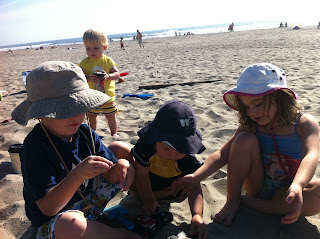 Email ThisBlogThis!Share to TwitterShare to FacebookShare to Pinterest
Labels: out and about