Feb 27, 2007:
I went to my first day of the T-shirt Quilting class. I was told to bring all my t-shirts. So I did ... all 6 bags or so of them :-) Going in, I was imagining I'd do an "event" quilt, using all my tees from different events ... triathlons, running races, bike tours, stair climbs, and inline skating events. After being shown examples and told that the best looking t-shirt quilts have 4-8 shirts in them, I realized it was time to pick a sub-theme. I decided to do a PACRACC quilt - even though I only had 4 t-shirts from all 9 years, but I had all 9 patches - 1986 through 1994. 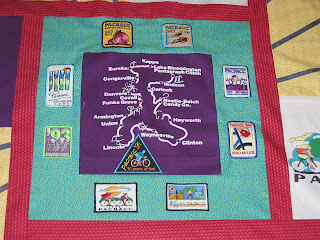 We started cutting up our t-shirts and fusing them to interfacing (makes the fabric sturdier and easier to work with). Our homework was to have all our t-shirts fused to interfacing and have a design drawn up, either sketched, drawn on graph paper, or done on the computer. I LOVE drawing structural/geometric things on graph paper, so I was pretty sure that designing the quilt was gonna be my favorite part. It is, next to seeing the finished product. :-)

March 6, 2007:
I arrived at class with my t-shirt blocks cut exactly to size and a design I was pretty excited about. I learned later that you only cut fabric when you absolutely have to. It's uncanny how inches disappear once you sew a few pieces together. My 60" x 60" quilt is actually 58" x 58" now, but I trimmed things the same, so it's square and that's what counts. I certainly didn't design an easy quilt to make, but it was gonna look cool if I could pull it off. I knew I had great resources to go to in Kate (my friend who also took the class and made a really cute baby quilt out of onsies) and her Mom (who owns the fabric shop where this class took place). They were super generous with tips and instructions along the way, not to mention their time.

My design was well-liked and no one acted like anything would be impossible, so I moved forward. We picked our fabrics that night by taking our t-shirt blocks into the shop. I was lost. Bolts of fabric as far as the eye can see and t-shirts in my hand that were all different colors. I walked around looking, pretending I knew what I was doing. When Kate was done getting her fabric, she helped me out. First, we picked the border around my center block. She pulled the blue fabric with a subtle green flower print and it magically coordinated well with everything. Then, for the "pinwheeled stripes", she picked a rasberry color little circle patterns in it ... it coordinated well too. Wow! Then a yellow with wavy lines for behind the wheel. Knowing the shop well, she knew exactly what she was looking for for my tent and tree and picture blocks - cloud fabric - and then grass fabric for my grass - genius! :-) and then there was the tent - two shades of orange, the tree - green, the trunk - brown with lines in it (looked like bark - perfect!). Then we found a gray with a nice pattern in it that made it look shimmery like spokes and a black with a pattern that made it look like tire tread. Border fabric would be chosen later once I could see it all coming together.

March 13, 2007:
I came to the 3rd class with my main pieces of fabric all ironed and cut to size and with my middle t-shirt block sewn onto the fabric bordering it. I thought, hey, I'm really keeping up here, which I basically was, but there was a ton left to do - but no biggie, I had time, didn't need to finish by the end of the class or anything. I laid all my pieces out and it occurred to me that I needed to change the layout slightly. I got 2nd and 3rd opinions and it was a go. Not a major change at all, but I'm glad I noticed it. I proceeded to cutting and piecing together the most difficult 2 blocks on my quilt - and the smallest. The tent and tree scene. I got very little done, seemingly, and continued to get very little done throughout the week ... they were hard.

March 20, 2007:
The last class. My memory is fading a little. It was this class that I was piecing together my tent and tree blocks, but still had to finish them at home afterwards. I can't remember if I was working on them for 2 classes in a row, plus the week at home, and still didn't get them done ?? They were hard and detailed, but that's a lot of time. It's all blurring together a little.

Kate had told me - on the DL - that there'd be a "prize" for finishing my quilt "soon". "Soon?" "Yes, soon." Turns out Roberta, our instructor, is writing a book on t-shirt quilting, and anyone done by April 1st could have their quilt professionally photographed and pictured in the book. Hmm, that would be really cool, but there's no way I'm gonna get this done by then. I still have to learn what to do after I piece the top together! I also still had to buy my batting, border material, etc. Plus, I hadn't cut out my appliqued pieces yet either. There was no way.

Over the next week and a half, I finished the tent and tree blocks and also got the rest of the top pieces put together. I also printed and ironed on the photos. On Friday, the 29th, I found out that I had until April 2nd, but I was still pretty sure that wouldn't help. I was imagining really intricate quilting that still needed to be done.

Sat, Mar 31st:
I called Roberta asking whether it needed to be quilted for the picture. It did - darn, I'm not gonna get this done in time. I did, however, have until Tue, the 3rd now. (It's so the story of my life to push deadlines and slip in by the hair on my chinny chinny chin - but I didn't think I'd slip in this time). Sat night, I took what I had over to Kate's house for some further instruction. She was going to be out of town starting Mon so I had to know what to do. I had decided I was really gonna try as hard as I could for the next 2 days to get it done.

Sunday, April 1, 2007:
I already had a half day of shopping planned with a friend and I wasn't going to skip that (who do you think I am??), so I decided I'd "really try" to get back in town before 5 pm (when the fabric store closed) to buy the rest of my quilting supplies. I was doubting I'd make it on time - "on time after shopping" are the key problem words here. Would you have thought I'd actually make it? Yeah, me either. But I did. Yeah, that's right. Made it. By the hairs on my chinny chin chin ... got there at 4:55 pm and Bonnie was nice enough to stay after a bit to help me get everything I needed and even explained a few more things, like how to do a binding - something I hadn't gone over with Kate yet - oops! She lent me the shop's quilt handbook as long as I promised to return it.

That night, I was up until 3:30 am and only finished the border. Holy crap, I'm not gonna get this done. Still had all the applique of the spokes and wheel to do (at least the spokes were cut and the steam-a-seam was ironed on them, so they just had to be placed and ironed on). The wheel wasn't cut out though and how the hell was I going to cut the proper curvature without a gi-normous compass?

Monday, April 2, 2007:
I used every spare moment I had to get more done even though I wanted to nap with Reagan after only 3 hrs of sleep. But to lose sleep and not make the dealine just wasn't gonna happen. I was committed no matter what now. 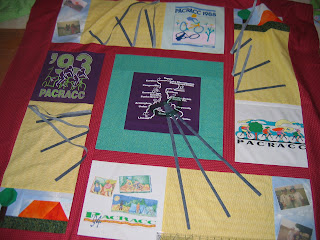 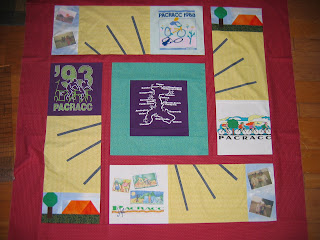 8:30 pm: the patches and the wheel were on. Gi-normous compass? A pin in the center of the quilt and a pencil on a string. Genius, I tell ya, genius! :-) 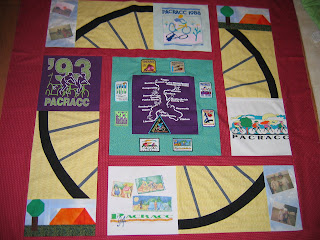 This finally marked the end of the quilt top. I still had to iron, pin, sew, and press the backing material (the quilt was too big for it to be one piece of fabric) and then baste, quilt, and bind, none of which I had done before.

10:45 pm: finally done basting - the easy way - with Quilt Basting Spray that makes the 3 layers stick together and much easier to quilt... nothing shifts around on you. Yes, it took over 2 hours to prepare the backing material, put the layers together and trim the edges a little ... well, there was also a brief phone call with Kate, who called from 3 hrs away after getting up around 4:30 that morning to make sure I was doing ok. So nice of her :-)

After helping me carry it out to the driveway, fold and unfold the quilt layers between spraying, and carry it back inside, Cam went to bed. 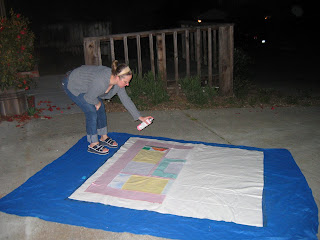 Time to try this quilting thing ... just simple lines ... "stitch in the ditch", Kate and Bonnie told me. It was quite the workout (and occasional frustration) manipulating this thing around the little sewing machine and work table (between 11 pm and 3:30 am) ... good thing since I hadn't seen the gym in a couple days now. 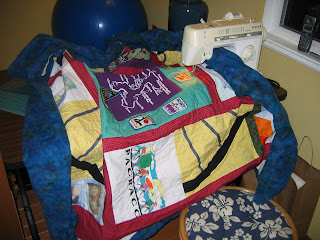 I did try a couple fancier stitches, pictured here. Much harder than I imagined, but it turned out fine. 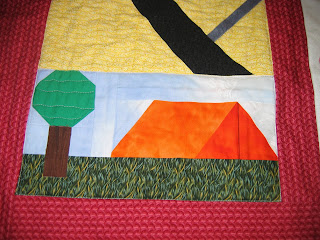 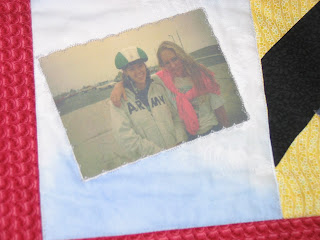 Tuesday, April 3, 3:37 am: I ACTUALLY FINISHED QUILTING THIS THING!! 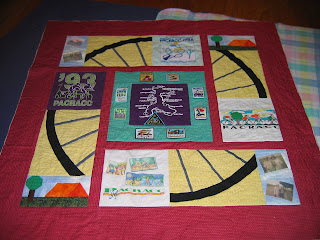 I spent a little time in disbelief at this point. I wasn't done though... how much should I chance saving for tomorrow, I wondered? The deadline was in the "afternoon", I found out. I was supposed to call the next day and check. Hmm ... I better get more done. I cut, sewed together, and pressed all my binding strips and this took me up to almost 5 am. Yes, just preparing to bind it took 1.5 hours! I couldn't bare the thought of going to bed after Cam's alarm started going off, so that was it for that night.

2:45 pm: Feeling awesomely well slept [sarcasm], I continued on. It was now "afternoon" and I was so close. Here I am pressing the seems on the binding strip - after having sewed it on all the way around ... on the first side. There was still the more difficult 2nd side (that is normally hand sewn, but there was no time for that). 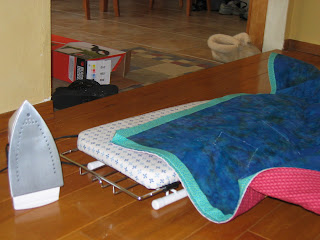 I made another call and it turned out I had until Wednesday, the 4th. Good, but I was finishing today and actually sleeping tonight regardless. However, maybe my Mom could see it in person before I turn it in (she arrived at 3pm that day). I just needed to stay in touch to see when Roberta was going to drop the quilts off for sure.

4:30 pm: 100% done!! My Mom saw it and loved it and I ended up turning it in Thursday, the 5th. I can't believe how well it turned out. Turns out it actually looks nice in our living room too, so it may be a wall hanging. The pictures here don't do it justice like real life ... you can't get the full effect of the texture of a quilt on the screen, but don't forget you can enlarge them by clicking on them. I never actually took a final picture - oops - but I will when I get it back soon. If you've read this far, I applaud you, but get a life! JK :-)

Email ThisBlogThis!Share to TwitterShare to FacebookShare to Pinterest
Labels: Melanie