Self feeding:
Reagan has decided she feeds herself now and is doing a pretty good job at it. She'll actually refuse the spoon from me, grab it, re-dip it in the bowl, then eat the bite. 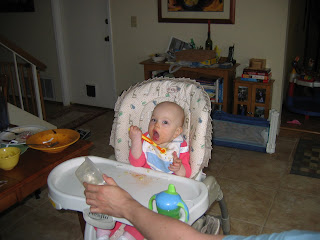 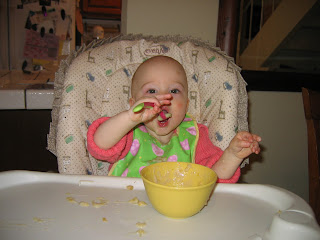 Doing chores:
She has successfully learned where her shoes go and loves to put them in the basket when we take them off. She also brings a shoe to us when she wants to go outside ... and will get the matching shoe, sometimes after a couple tries, when we tell her to go get the other shoe. I credit my mom for thinking of designating a spot for her shoes. Great idea, Mom! I'm trying to think of other things that double as chores that she can learn now.

More signing and learning body parts:
She seems to be learning things at light speed now too. I taught her the sign for "please" the other day by physically making her hand do it, then giving her what she wanted - my glasses. Ever since that moment, she does the please sign on command. Also, in her bath the other night, she started grabbing her legs and saying "uhh", which basically means "tell me what this is called" and we started going over the names of several body parts ... belly, belly button (which she was particularly intrigued with, especially mine .. and she'll try to lift my shirt to see it), legs, arms, pee pee. After the bath, when I was getting her dressed for bed, we quizzed her on a couple ... belly and belly button ... and she got 'em! What a sponge.

Loving music:
For a while, she's been bopping her knees along to music and will now "dance" on command. We've also noticed she attemps to sing along to songs by saying "uhhh" in a more long, drawn out fashion. She also tries to mimic the hand motions of songs like Itsy Bitsy Spider and she claps along to Patty Cake and If You're Happy and You Know It. She loves, yet is a little frightened of, the talking, singing puppy dog that Auntie Erin got her for her birthday. 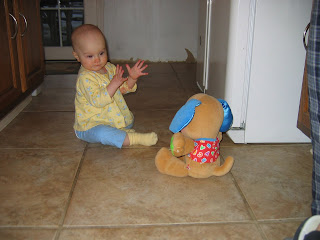 Showing affection:
She started showing a lot of interest in my old Cabbage Patch Dolls sitting up in her closet. When I let her play with them, she gave them hugs and attempted to walk around carrying them ... even though they're about as big as her. She also points to all their facial features. She has really gotten into the hugging thing and will randomly walk up and hug us if we're at her level or when we pick her up ... and I mean real hugging; her arm wrapped around our neck (other around our oposite arm) with a nice tight hold and her head on our shoulder on the other side. We always say "ohhh, thank you" when she hugs us and now she's saying "uhhh" when she hugs. I find her randomly hugging stuffed animals by placing them near her neck and saying "uhhh". SOOOOO cute! When I was watching another little girl this week, (Anya - 18 mos.), the first thing they both did was hug each other ... it sort of knocked Reagan over though since she's smaller and not as steady on her feet yet.
Posted by Camelot Blog at 1:35 PM