Reagan and Mommy Both "Get Stuff"

Yesterday, I had a nice long day of shopping - baby free (my Mother's Day gift) - and got a lot of great stuff for of course little money. It was fun, I made it through 4 stores and I had to rush to the register at Kohl's when the "our last register is closing in one minute" warning came over the loudspeaker at 10 pm. I need more time!

Cam was home watching Reagan (other than when they met up with me for a late lunch) and when he put her to bed, she kept saying "milk" (in sign) followed by "where?". She must have picked this one up from us since we didn't try to teach it (hands out with palms up). She's been doing it a lot lately and we finally figured out that she's asking "where is it?". duh! We totally do that when we're asking her where something is.

Also, today at our friend's house, I was holding her and she pointed at Leann and said "dat" as usual and we said, yeah, that's Leann. She turned and pointed at my eyes - almost poked one out - and then pointed toward Leann's eyes (who was wearing glasses) and it took me a second to realize what she was saying or even that she was saying something significant at all. I normally wear glasses at home, so she was noticing that Leann had glasses too or maybe she thought Leann was wearing my glasses ... I don't know, but I'm just amazed at how she's making sense of the world and thinks of things that aren't in the here and now.

Our first attempt to take Reagan out in the bike trailer (last weekend, May 26) lasted all of 1 whole mile averaging 3 miles per hour! Her helmet finally fit, but she wasn't tall enough for it to clear the back of the seat, so it kept getting pushed over her eyes and when she'd try to lift it, the chin strap would just choke her. She ended up in a screaming fit of frustration even though we stopped and tried to readjust it 3 times over the mile. After our trip around the block, we were done. Good workout! :-) 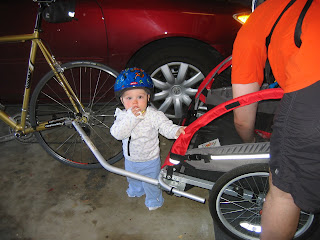