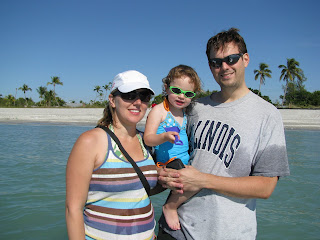 The first week of December, we spent a week on Sanibel Island on the Gulf side of Florida. It was great weather, very relaxing, and so fun to spend time with family as always. We stayed in beach-front cottages and here's Reagan walking down our beach path the first morning. It was cool in the mornings and evenings, but got nice and warm during the day. 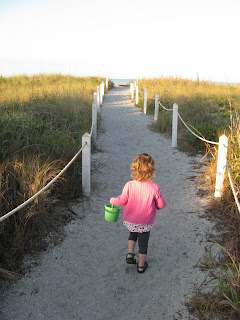 "Shelling" was the main attraction and 7 am was apparently the magic time to get up and go - the tide had washed in new ones I guess. At that hour, I chose to continue dreaming, mostly about how nice it would be if all the shells were raked up so they wouldn't be in my way :-) Ok, that's an exaggeration, but I was pretty unamused by all the shells. Being over 6 months preggo though, just relaxing and hanging out felt great. We swam at a local resort pool one day, played on the beach, did a little island thrift store shopping, and gave ourselves mud spa treatments from the Dead Sea mud Aunt Augie brought from her recent trip there. Reagan, Christie, and I were the "Mud Sista's" together one morning. 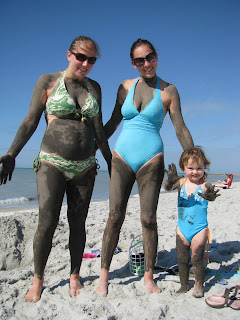 Reagan really loved playing in the sand and especially loved when Uncle Danny and then the next day, Daddy, dug a huge hole for her to slide into. Here's Reagan and Faire playing in the hole. 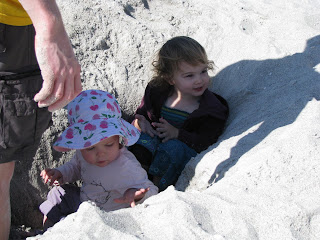 We also got showered with German chocolate from the suitcase full Augie always brings along when she sees everyone. She even set up a little scavenger hunt where finding euros (in chocolate) outside the cottages bought you real chocolate and packages of gummy bears. We also had a chocolate tasting contest where you had to list 8 kinds of chocolate in order from lightest milk chocolate to darkest dark chocolate (ranging from about 30 - 80% cocoa ... I like the darker ones the best). Becky (Uncle Steven's girlfriend) got every single one right and a few of us, including myself, only flip flopped 2 of them.

Here's Reagan's huge, soft dolphin from Great Grandpa Andrew and Shirley that she had to hug during nap even though it's as big as her. 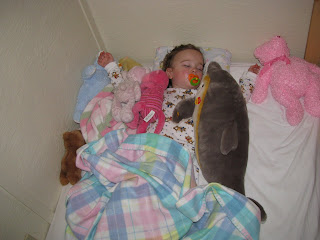 Reagan's way into this Dr. Suess book Shirley's reading to her. 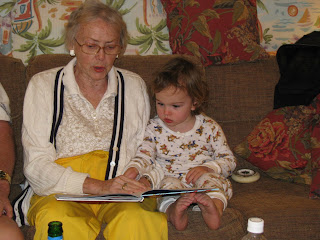 Cousin Faire in a big beach hat - too cute! 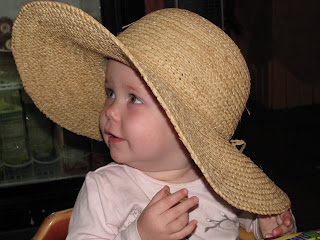